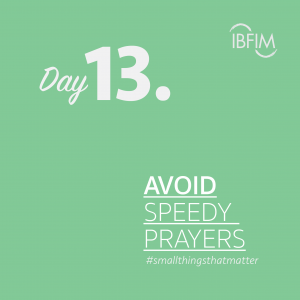 Many of us tend to rush and easily distracted during prayers. Perform your prayers deeper and meaningful. It is a good way to develop the habit of concentration.

Sayyidina Abu Qatadah r.a narrated that Rasulullah SAW said: “The worst thief is the one who steals from his own prayer.”
People asked, “Messenger of Allah SAW! How could one steal from his own prayer?” He SAW said: “By not completing its rukoo’ and sujood.”
To complete rukoo’ is to stay in that posture long enough to recite ‘Subhana Rabbiyal Adheem’ three times, slowly, and ‘Subhana Rabbiyal A’ala’ three times, slowly, in sujood. He SAW also announced: “He who does not complete his rukoo’ and sujood, his prayer is void.”
(Musnad Ahmad, Tabarani, Majma’ al-Zawaid)